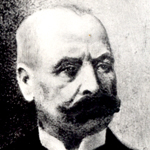 Stoyan Shivachev was born 1851 in the town of Malko Tarnovo. He graduated primary school in his hometown, junior high in Lozengrad /K?rklareli/ and high school in Edirne. For a short time Mr. Shivachev worked as a teacher in the village of Gramatikovo, followed by his appointment at the Bulgarian school in Burgas for school year 1874-1875. During his four years of teaching Stoyan Shivachev introduced to the school new organizational and pedagogic forms, more secular education, which led to increased number of students and significantly raised the prestige of the school. On 6.02.1878 – the Liberation of Burgas, Mr. Shivachev welcomed Colonel Lermontov’s detachment and on the following day took part in the establishment of the first Bulgarian municipality. He was appointed secretary of the municipal government and was forced to part with his job as a teacher. In 1914, on a trip to Macedonia, Mr. Shivachev vanished in the area of Dede-agach without a trace.