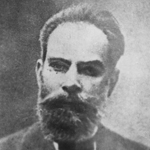 Sava Katrafilov was born in 1836 in the town of Elena. He graduated from the famous „Daskalolivnitsata“/the first Bulgarian class school/ and continued his education in Bolgrad’s Seminary. After his return from Russia, he dedicated himself to teaching at school, but he is more excited about preparation for a future national uprising so he was meeting with Levski and Lyuben Karavelov. In Burgas Mr. Katrafilov worked shortly as a teacher during the autumn of 1873, but he spent more time to revolutionary activity, going around the villages in Strandzha. Because of these activities the school board forced him to leave before completing the school year. After the horrifying defeat of the April uprising he joined the detachment of the revolutionary Hristo Botev. As a member of staff, Sava Katrafilov was involved in the capture of the steamer "Radecki" and in the battle road of the revolutionary detachment from Kozloduy to the vicinity Milin kamuk, where he met his death.