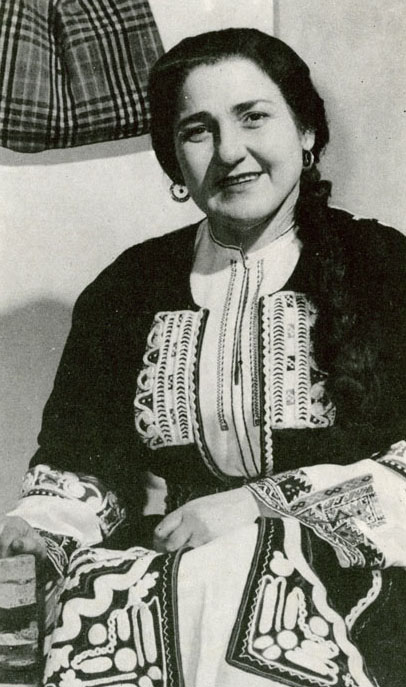 Magda Pushkarova was born 1920 in Malko Tarnovo in a family of refugees from Eastern Thrace. Everyone in her family could sing - brothers, sisters, parents. Many of the songs that were later included in her repertoire, she learned as a child from her family.

The voice of Magda Pushkarova is unique - slightly muffled, featuring individuality and uniqueness. Her singing can not be confused with the singing of another folk singer. Her songs are beautiful and plaintive as it was the life of refugees from Eastern Thrace.

In 1951, she was named soloist of the State Ensemble for Folk Songs and Dances "Filip Kutev." Along with folk singer Valkana Stoyanova they were one of the founders of the ensemble. In the golden collection of BNR are kept more than 100 of her songs.

At the International Folklore Festival Burgas 2005, Magda Pushkarova was awarded with "Nestinarka" for contribution in the field of folk performing art.
Posthumously in 2006, the book "The Enchantress of Strandzha" was published, containing 86 songs from the favourite repertoire of the singer. One of her best known songs are "Tudoru, Tudoru", "Why do not you get me married, mother."

Magda Pushkarova died in 2006, at 86, but remains in the history of Bulgarian performance art as one of the golden voices of Strandzha.