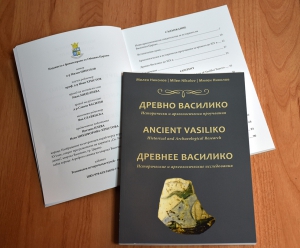 The latest edition of the Regional Historical Museum - Burgas "Ancient Vasiliko. Historical and Archaeological Studies" is now a fact. The book presents the latest data on the history of old Vasiliko, drawn from archaeological research and historical sources. The excavations were carried out under the "Via Pontica" project in 2012 in the area of the Church of the Assumption of the Holy Virgin. Then a Thracian pit sanctuary from the IV-III centuries BC, traces of habitation from the VI-VII centuries, remains of walls and many materials from the XIII-XV centuries, houses and a necropolis from the XVI-XX centuries were discovered. based on the analysis of the findings and the historical sources for Vasiliko, the oldest of which are from the 12th century, it is clear that the earliest archaeological remains in ancient Vasiliko are from the 4th century BC, and from the 12th century to today the settlement exists without interruption. This makes Vassiliko one of the most ancient settlements on the Black Sea coast, along with major centers such as Odessos, Mesambria, Anchialo, Agathopol and Apollonia Pontius.
The book is trilingual - in Bulgarian, English and Russian, luxurious, with a full-color print. Its publication is fully financed by the Municipality of Tsarevo. The author of the book is Dr. Milen Nikolov, director of RIM - Burgas and head of archaeological research in ancient Vasiliko.
The book will be presented to the general public in Tsarevo.