Regional Historical Museum presents the book of Prof. Dr. Ivan Hristov "Secrets of the Chengene Scaffolding Bay in the Black Sea" and the results of the latest underwater research at Chiroza

Regional Historical Museum presents the book of Prof. Dr. Ivan Hristov "Secrets of the Chengene Scaffolding Bay in the Black Sea" and the results of the latest underwater research at Chiroza 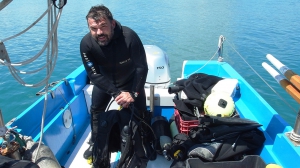 On June 30, 2022, Thursday, from 11:00 am in the Archaeological Museum-Burgas, will be presented the latest book by Prof. Ivan Hristov. It is a joint publication of RIM-Burgas and the National History Museum. The book is a report on the joint work of the two museum institutions in the Gulf of Chengene Scaffolding for the period 2020-2022 and presents the results of archaeological research on land and underwater in the area of Chiroza, funded entirely by the Municipality of Burgas.
In the scientific research the emphasis is on the research of the coastal territory locked between the Metohia Peninsula (Cape Chukalyata) and Cape Foros to the Burgas Bay. The contribution to the supplementation of the archeological map of the region is visible from the detailed information presented in the monograph about sites that remained unknown or little known until the summer of 2020. For the first time in scientific circulation are presented the results of underwater research in a vast area, locked north to the island of St. Anastasia, west to Cape Kaba Burun and east to Cape Chukalyata.
The study is based on an interdisciplinary approach through the use and analysis of a variety of source material (archaeological finds, preserved written information from Ottoman documents, travelogues of Western European travelers and diplomats, Bulgarian local historians, different in type and chronology maps). The aim is to restore the picture of the settlement development in the studied region for a long historical period.Structurally, the book consists of 7 parts. The results of the archeological excavations of a Hellenistic fortified site on Cape Chiroza, the ancient sanctuary in the same area and the underwater excavations in the Chengene Skele Bay in 2020-2022 are presented in detail. Dozens of finds from both land and underwater research are presented. They date from the first millennium BC. to the Middle Ages.
The book includes a commentary on preserved written information and archaeological materials about sites on the coast of Burgas Bay, such as the ancient settlement of Cape Kaba Burun, the late medieval settlement and eponymous port Chengene skele, the village of Chukalya, the convent of the island monastery St. Anastasia and others. Numerous photos, drawings and maps are attached, which illustrate the successfully presented information.
At the premiere of the book will be presented the results of the latest underwater archaeological excavations at Cape Chiroza, held in late June 2022. The Burgas public will be able to see live some of the hundreds of new finds discovered by underwater archaeologists. The ship carrying the famous glass treasure from Chiroza, discovered in 2020, was also discovered this year.

Experts from Burgas Free University and Regional Historical Museum - Burgas participated in a working meeting in Porto, Portugal, dedicated to the digitalization of intangible cultural heritage