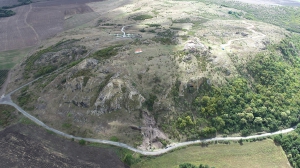 The 2022 surveys of the medieval city of Rusokastro have been completed. For more than a month, archaeologists from Burgas studied an architectural monument unique in Bulgaria, at least so far, a fortified passage ending with a monumental tower-well. Similar ones were found at the royal capital of Tsarevets in Veliko Tarnovo and at the medieval Cherven, but at Rusokastro an additional battle tower was built in the middle of the passage, which makes it completely different from other similar facilities. The passage is nearly 90 m long and 3 to 7 m wide. It is located between two fortress walls, 2.2 m wide each. The western wall has been preserved at a height of up to 4 m., but the eastern wall is very poorly preserved - concrete foundations for a stone crusher, which extracted gravel for the runways of the military airport in Ravnets in the 1960s, were cast on part of it. For this stone crusher, the rocky hill on which the medieval city was built was also blasted, so part of the northern fortress wall of the city was also blasted. Its walls end in the flat part next to the Rusokastrenska river, with a huge tower-well. Its walls are 3 m wide. The tower itself is triangular, with a protruding sharp edge, resting on the road between the village of Rusokastro and the village of Zhelyazovo. A large well was built inside it, explored at a depth of up to 4 m. Its walls are made of huge squares, reaching 1.2 m in length. The steps to the well are made of whole stone blocks, and there are 8 of them. 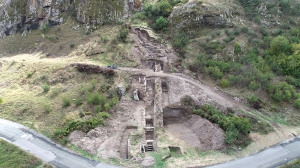 It has been categorically established that the passage with the tower-well was built in the second quarter of the 13th century, during the time of the Bulgarian king Ivan Asen II and his first successors. Towards the end of the century, the western wall of the passage was repaired in a short section.
The walls of the passage cut through a previously unknown building from the 6th century.
In view of the brilliant results of the study, the design of conservation and restoration works is planned by the Municipality of Kameno.
The excavations of the medieval city of Rusokastro are financed by the Municipality of Kameno and the Ministry of Culture of the Republic of Bulgaria, and are carried out by the Regional Historical Museum - Burgas.