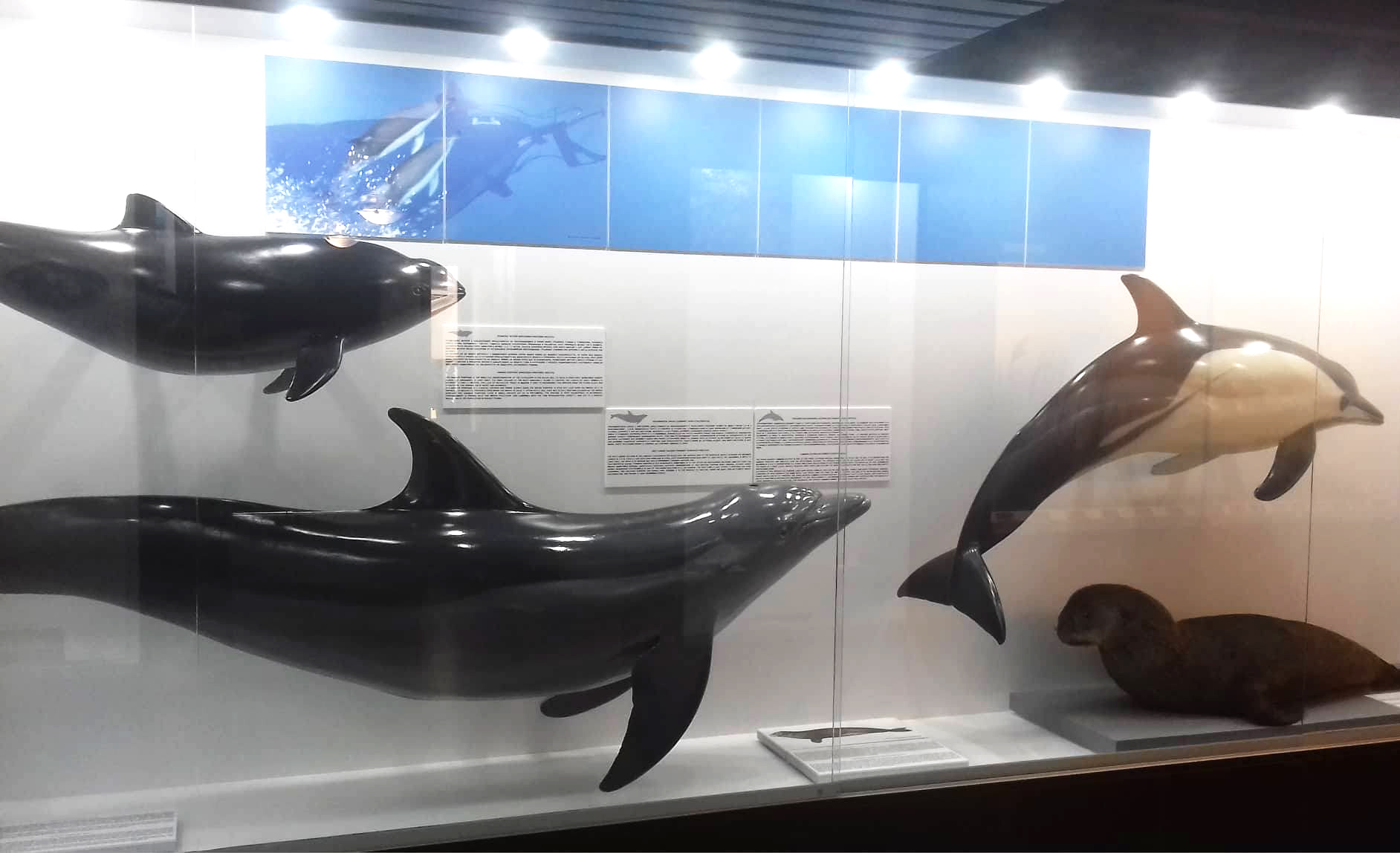 On 23 July 1982, the International Whaling Commission imposed a total ban on the capture of the largest mammals on Earth for 1985 and 1986. Since then, this day has been celebrated as World Whale and Dolphin Day.

From this year at the Natural History Museum Burgas you can see all three species of dolphins found in the Black Sea - Black Common dolphin, Black Sea bottlenose dolphin and Black Sea Harbour porpoise.

Tips for helping cetaceans in danger

When assisting a distressing specimen, there is no difference in which of the three species the manipulations are performed, but the depth, status and weight of the specimen are taken into account.

The activities under this instruction apply to a copy:
1) unoccupied but located in dangerous proximity to the shore, which can sail alone
2) stuck in shoals or thrown into the shore, unable to sail without help.

<b> 1. Unaccompanied cetaceans, located in dangerous proximity to the shore </ b>

A distinction must be made between a desolate dolphin and one who is approaching himself. Physical contact should be avoided, even swimming to the beach, not eating or touching. The cetaceans have a strong social and altruistic attitude and help sick and injured individuals by keeping them and keeping them on the surface to breathe. Dolphins are wild animals, and if one tries to interact with such an individual, it can cause an aggressive reaction on the part of the flock. This is especially true when it comes to babies guarded by mothers. Females keep babies for several days, even after they are dead or dead.
Most often the cases under point 1 cover the so-called "Social dolphins" that swim in shallow waters in front of beaches. In almost all cases these are not disastrous specimens and they will sail themselves.
Therefore, rescue actions with respect to the described specimens should not be taken.
In order to move the dolphin away from the dangerous shallows, the noise and the motion of a motorboat can be approached, carefully approaching the shallow specimen to make it sail into the sea. In this case, the direction of approach should be from the shore to the sea. For the same purpose, acoustic repellents (pingers) may also be used. When doing so, there should be no other boats / jets / swimmers in order for the dolphin to be safely aimed at the high seas.
2. Cetaceans seated in shoals or thrown out on the shore

These are the cases in which you need to be helped. Prior to taking action, the Regional Inspectorate of Environment and Water (RIEW) -Burgas must be notified (Phone: 056/813 205) or Varna.

All available data and circumstances should be communicated to the RIEW employee, who will give specific instructions to be fulfilled.
<b>
Recommended actions depending on the condition of the specimen are: </ b>

1. Reducing the stress of the dumped dolphin - the manipulation of the specimen should be carried out by one or two people, while the remainder should be kept at a distance (minimum 100 m). It is not desirable to approach children or dogs. Silence must be kept and no unnecessary movements are made. Stress reduction is important for the survival of the dolphin at its later release.
2. Approaching to a cetacean - always approaching from the tail fin or front to the muzzle without standing on the side of the head. Avoid touching the head and the muzzle with all handling. One can hurt the teeth of the specimen even if it is not bitten, as well as being scratched by the tail. This may then cause infection, so it is recommended to seek medical attention in such cases.
3. If the specimen is lying on one side (the cetaceans are often prone to one side where there is a risk of suffocation), you should carefully turn it over your stomach by keeping your chest flippers down. The breathing hole, which is a "hole" located on the top of the head, should not be blocked. It should not be sandy or underwater. At no point should the flippers or tail be pulled.
4. The skin of the cetaceans is extremely fine and should be constantly wetted because it wrinkles and forms wounds when dry. A good option is to cover with a completely wet cloth (eg a water-soaked towel), a blanket or seaweed to keep moisture and protect the skin from direct sunlight and wind. Water should not fall into the airway. Even the organization of moving and returning the specimen to the sea takes minutes, the actions described must be carried out.
5. If the dolphin is exposed to direct sunshine - a shade should be provided using a beach umbrella, awning, a tent, etc.
6. Cetaceans live entirely in the water. When stuck on the shore, their internal organs take up the entire weight of the body and begin to crush (this is more valid for heavier specimens and specimens). That is why urgent action is imperative. If it is necessary to keep the specimen for more than 10 minutes, especially if it is big, holes should be dug under the fins (flippers). This makes it possible for the dolphin to feel more comfortable because it does not live on land and the fins are not adapted to flat surfaces. A hole under the breast can be dug to fill with water. This will not only keep the underside of the body wet but reduces the pressure on the chest, lungs and flippers.
7. Moving - can be done with pre-wetted litter, canvas, towel or folded nylon to withstand the weight of the specimen. The dolphin is always on his stomach and never lying on his back. Several people are involved in the move depending on the size and weight of the specimen. He moves to the boat to be transported on the litter, canvas, or nylon. It is recommended to run as far as possible into the sea.
8. For the provision of a boat, assistance should be sought from the RIEW, from the beach rescuers, if available, from the local fishermen or the population. Given the need to act quickly to return the animal to the water, it is not necessary to wait for an employee of the RIEW. The first and closest boats are used, which can be found within 15 minutes of finding the specimen. For security reasons, the size and type of boat should be matched to the size of the mammal. Small cetaceans such as the mucilages can also be transported in shallower waters by handsome swimmers.
9. The dolphin should not be dragged or pushed into the sand because it will damage the skin. Under no circumstances should the tail of the specimen be pulled, as this could lead to damage to the spine and the brain.
10. Once released into the water it is advisable to keep the specimen on the surface so it does not sink so that the breathing hole remains above the water surface. If it is launched by a boat at a greater depth and distance from the shore (the most appropriate option), this activity should be done by experienced swimmers and in the presence of life jackets.
11. Monitoring. Once the specimen has been released, its behavior should be traced as well as that of other cetaceans available in the area. When the dolphin feels secure, he will sail himself into the sea.
12. It is not recommended to transfer the specimen and release it to another location on the coast, even short distances, as it is further traumatized and stressed, which may be fatal to its life.
13. Do not give dolphins water or food.

14. Diseases transmitted by man's dolphins (zoonoses). Such are, for example, brucellosis and measles. We recommend taking precautions - avoiding contact with the airway, exhalations and other physiological secretions from the dolphin body. For cetaceans, wear rubber gloves if possible. After handling, the hands and other exposed parts of the body should be washed thoroughly.
15. When the specimen is exhausted, dehydrated, injured, ill, after returning to the water, it may not survive and be thrown out of the currents or elsewhere. In these cases, it is advisable to stay on shore for autopsy and other specialized studies to determine the cause of death.

Archaeologists in Rusokastro with the first golden find for this season