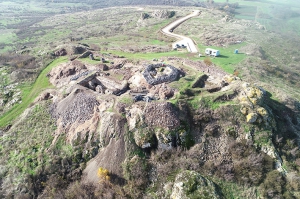 The archaeological season in the medieval city of Ruskastro has already begun. During the current season, it is planned that the archaeologists from Burgas will study the site in two stages. During the first one, the reservoir of the castle of the medieval city, which served the garrison and the governor of the citadel, will be further explored. It is a monumental structure, 14 m long and 8 m wide, which was covered by two semi-cylindrical vaults. Its walls have been preserved at a height of 3-3.5 m. It is planned to further study the embankments in it, and to hand over the site for conservation and restoration design.
In the second stage, the task is to further explore a fortified passage with a tower-well, leading from the northern wall of the medieval city to the Rusokastrenska river. This is actually the water reservoir for the city's inhabitants, the first floor of which was underground.
The excavations from the first stage of the studies are fully financed by the Municipality of Kameno and are carried out by the Regional Historical Museum - Burgas.

The Bars from Rusokastro - the world artistic monument, has already been prepared as a souvenir for the guests of the Burgas Museum in honor of the 690th anniversary of the Battle of Rusokastro