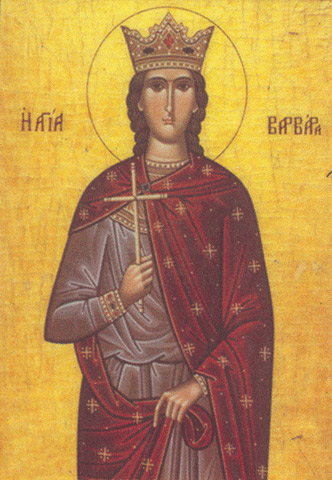 St. Barbara is a Christian saint and martyr honoured among both Orthodox and Catholics. In the popular believes of the Bulgarians St.Sava and St. Barbara are sisters or servants of St. Nicholas. Thus they prepared his feast, as we learn also from the saying "Barbara kneads (boils), Sava bakes, Nicolas eats (treats the guests)".
St. Barbara protects children from diseases, women turn on her to appease smallpox, she is also known as patron of fertility and poultry. The St.Barbara's holiday is popular mostly among women; the rituals involve mostly girls and women. They wake up before sunrise and go to the well to pump clean "Barbara's" water. With it they knead bread, smear it with honey and give it away to bring health to their children. In Strandzha the bread is knead without leaven and then pierced on top with a fork. They call it "pryasnichena pita". Behind the door the women hung small buns named Baba Sharka (Granny Smallpox). Mothers give their children a few beans, which they rub on their faces while saying "Kakto e byal fasulut, tui da e byala i sharkata"(en: As the beans are white so be the smallpox!)

A candle specially designed for St.Barbara is lightened on top of the ritual bread. This candle is very long, has magical powers and is kept throughout the year. It is lightened only if necessary, in danger of storms and disease, with the belief that it can calm down the elements and stop all evil.

In the morning everyone should eat boiled wheat or corn for a good harvest. If the first guest in the house is a woman, female chicks will hatch.
In different parts of Bulgaria the Day of Saint Barbara is celebrated differently. In some parts of the country kids go around the houses, and in others girls called Barbara's maidens. They call for the health and prosperity. Farmers receive them in their houses with joy and give them apples, dried fruits, flour. This is why 4th of December is known as Women's Christmas. In Thrace, this is the first Christmas night, and as in other areas the first Christmas Eve is Ignazhden (St.Ignatius Day). The ritual restricts on this day are also contradictory. Women should not take on any homework, nothing should be put on the fire, but the most important ritual action is the preparation of bread? And the maidens who want to marry, it was on St. Barbara when they could show how working and agile they are. The one, who first bakes bread and then distributed it to relatives and neighbours, will be the first to get married.
In the Strandzhan village Izvor, the locals identify the saint with the disease smallpox. In the village of Rosen there is another idea - St. Barbara holds a bowl with honey and dab the children to heal faster.
In the various towns and regions, the ritual bread recipes are different, but when spreading the top with honey, all mothers are praying for the same - "St.Barbara help us and protect our children from disease!
On the pictures the women from Community Center "Prosveta" in the village of Lyulyakovo present the ritual activities on St.Barbara's day at the Ethnographic complex in Burgas.
<module="album" id="114" width="810" height="600" cell_height="150" cols="4" image_crop="1" crop_color="0,0,0">
Rosica Topalova, curator in Department Ethnography of Regional Museum Burgas


How to make Kupana banitsa

Ingredients: 3 eggs, 1 kg flour, 1 teaspoon salt, 1 tablespoon sugar, 3 tablespoons vegetable oil or melted butter, ½ liter of milk, yeast the size of a matchbox.
Preparation: Mix the crushed yeast with little bit of the milk, sugar and some flour. Allow the yeast to rise. Pour flour into a tray and in the middle set up a "well", where will be put the fuzzy yeast, beaten eggs, salt and fat. Knead the dough as adding milk until it is perfectly smooth. Put the dough in a muslin cloth and drop it in a large pot with lukewarm water, thus the name "kupana banitsa" (bathed banitsa). When the dough is ready, it will float on the water surface more than half size up. Remove it from the cloth and knead it again with flour. Only then it can be shaped and put in an oiled baking form. Over the top spread egg yolk beaten with a little water. Now put it in cold oven. It is important that this bread should not be baked in a preheated oven. Bake at 150°C. To add the end touch, smear the bread with honey.

November 21 - Day of the Christian Family

Natural-History Museum Burgas and Kindergarten Sluntse will celebrate December 6 with "Tales and legends of St. Nicholas the Wonderworker, people and marine life"