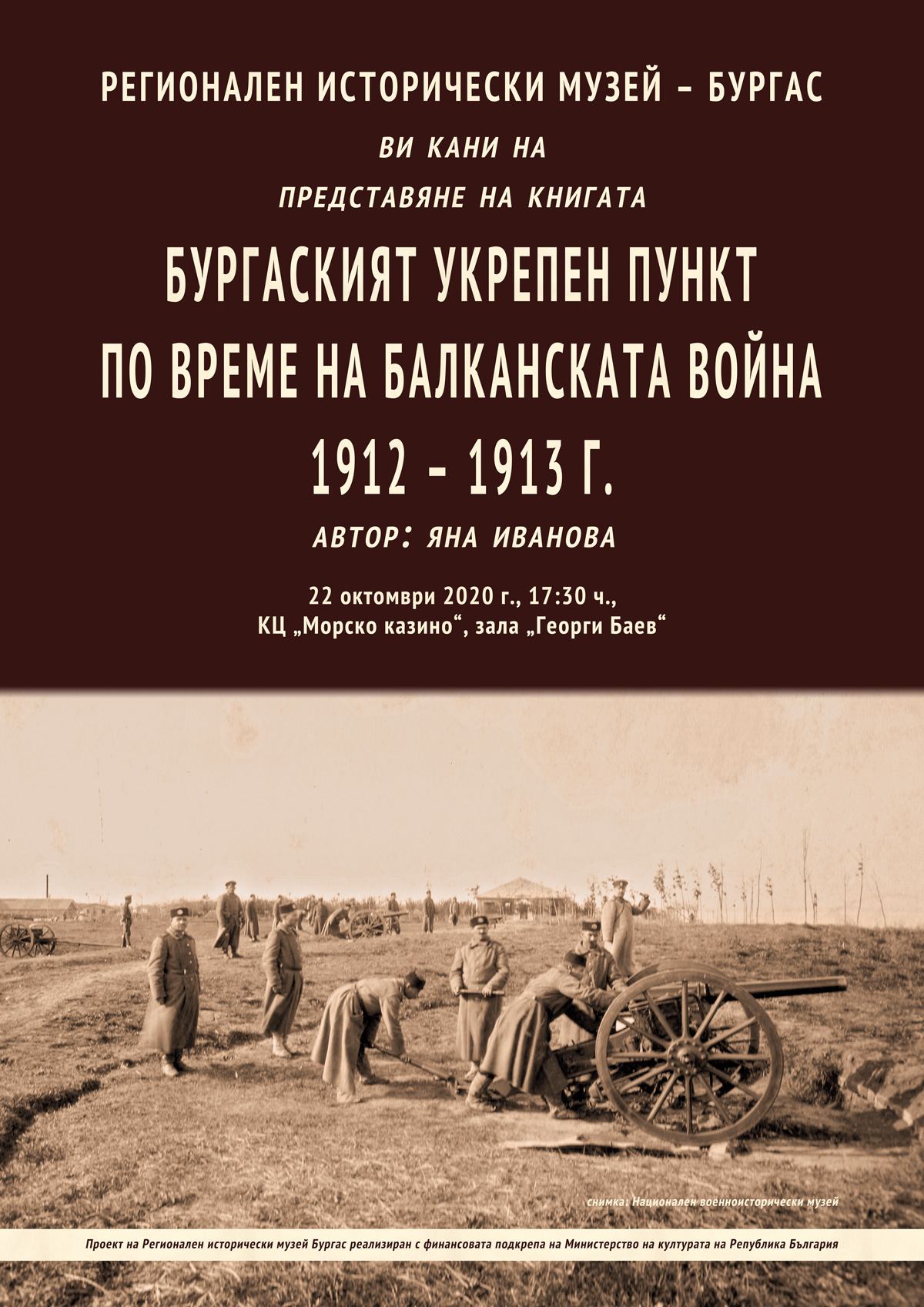 On October 22, Thursday, at 5:30 pm in the Georgi Baev Hall of the Sea Casino, the Burgas Regional History Museum will present an exhibition and a book about the Burgas fortification during the Balkan War of 1912-1913.

For the first time, original documents related to the history of our city from the beginning of the 20th century will be shown - military field diaries, telegrams, etc.

Another highlight of the museum event is the recently published scientific publication tracing the formation and activities of the Burgas fortified during the Balkan War 1912 - 1913. Its author and compiler is Yana Ivanova - a historian in RIM - Burgas. For several years she researched the valuable archives of Major Hristo G. Popov - Assistant Commandant of the station. The main contribution to her research is the publication of the diaries of the Burgas fortified settlement by Hristo Popov, which are a completely new and hitherto unknown historical source for the city of Burgas. The presented data shed light on the military life in the city in a different aspect. The book contains unknown data about the military hospitals, the Turkish prisoners of war and the wounded Bulgarian soldiers who were treated in the city of Burgas. The protection of the sea coast, the fire defense points from today's town of Obzor to the town of Tsarevo, the routes of the Turkish and Bulgarian warships during the fighting, the torpedoing of the cruiser "Hamidie" and the opening of the Bulgarian torpedoes on the Sozopol coast are presented in great detail. , from which it is clear that it was the torpedo of the ship "Daring" that struck the Turkish ship. Data on the port of Bourgas are also presented, as well as curious moments about the attempts for smuggling by some ships. During the preparation of the specialized edition a number of additional references and analyzes were made in libraries, archives and museums. The aim of the author is to show the importance of the Burgas fortification as an important social factor, as well as the role of personalities such as Hristo G. Popov and Lazar Obreshkov. The desire is to strengthen the connection between the interested reader and the museum as a scientific institution, in fulfillment of the patriotic mission of preserving and presenting the national memory.

The book will be presented by Prof. Svetlozar Eldarov from the Institute of Balkan Studies with a Center for Thracology at the Bulgarian Academy of Sciences.

The project for the exhibition and the book "Burgas Fortress during the Balkan War" was developed by RIM-Burgas and is funded by the Ministry of Culture of the Republic of Bulgaria and the museum's own funds.
After October 23, 2020, the exhibition will be exhibited in the Historical Museum at 31 Lermontov Street.
A copy of the book can be purchased during the presentation and then at the museum store.