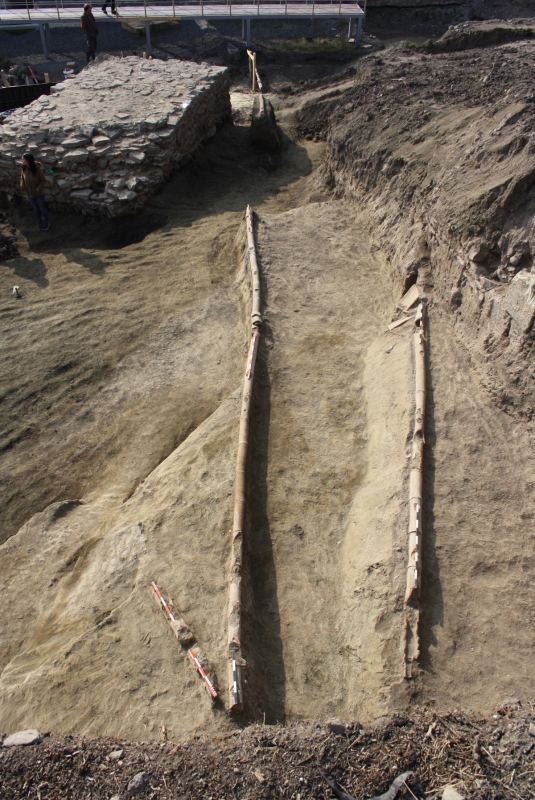 In 2022, the Municipality of Burgas fully funded the archaeological excavations of the most famous Roman spa center on the Balkan Peninsula – Aquae Calidae, in Vetren, Burgas. In 2021, archaeological research was concentrated in the northeastern sector and went through several stages. The first two of them were related to the construction of building № 3 (Archaeological Museum and Bath - a replica of a Roman bath). During these excavations, two ancient aqueducts and an open-air facility for open-flowing cold water and several graves, part of the Gothic necropolis, were discovered.
The final stage is the study of the northeastern apoditerium from the IV century of the early Byzantine bath with complete depletion of the cultural layers in the lower levels where a fire is found, associated with the Gothic destruction of the Roman bath. The mass pottery is from the III-IV century, and the coin material is from the reign of Constantine the Great and his successors.
The scope of the research also included the final discovery of the outer eastern face of the Eastern building of the early Byzantine bath with a length of over 14 m and a well-preserved height in places up to 3 m, two ancient ceramic water pipes and a control shaft.
During the archeological season of 2021, many archeological materials were discovered, among which a large number of coins - over four hundred, of which the dominant ones are again those from the IV century; a considerable number from the thirteenth century; medieval seals from the XI century; and two inscriptions.
On June 2, 2022 the beginning of the new - 15th - archeological season in the study of Aquae Calidae was set, which will continue throughout the month of June and the beginning of July. From the current year 2022, after the implementation of the first stage (archaeological research in the area of the Turkish bath, the reception tourist center and the museum-replica of the Roman bath) and conservation and restoration activities in their area, archaeological research will focus on the interior of the Roman and early Byzantine baths. The idea is to trace the northern part of the northern wall of the early Byzantine bath, already detected in 2021. An attempt will be made (as far as possible due to the presence of earlier communications and mixed layers) to enter the west-northwest inland bathing areas.

Your favorite places for selfies in the museum

With a new photo area, the Archaeological Museum welcomes visitors this week