<module="photo" id="1289" maxwidth="250" maxheight="300">
No matter how strange, in the Bible story of Original sin the apple is not specified, the story tells only how Adam and Eve ate from the „Tree of the Knowledge of Good and Evil“. From the apocrypha "Otkrovenie Varuhovo" (English: Revelation of Varuh) it becomes clear that the tree associated with the transgression is the grapevine. It is a peculiar creation, from heaven and hell. In Heaven the grapevine was planted by archangel Sataniel, which later became known as Satan. However, after the flood, the water washed away from Paradise a grape rootstock. Noah planted it in the soil. So it all began ...

Another legend tells that once the grape is dragging on the ground it gives no fruit. With the God‘s will one day a donkey walked past the vine and bit through it. Then the grape started giving fruits. This is how men learned that they had to trim the vines to enjoy their fruit.

Nobody can tell exactly where the first vine was born. It is assumed that its country of origin as a cultural plant is West Asia, the lands around the Caspian Sea and Black Sea, Asia Minor, Syria and Mesopotamia. Hence it was later spread in Thrace (the Balkans), Italy, France and North Africa.
Viticulture is known in Bulgarian lands since ancient times. The oldest trails from the viticulture in Europe have been discovered in Thrace along the riverbanks of Maritsa dating 5,000 years ago. Thracian winegrowers were the first teachers of viticulture in Europe. Ever since then, for centuries wine and grapes were constant companions of the people who inhabited our lands and viticulture became their livelihood.

<module="photo" id="1297" maxwidth="485" maxheight="350">
In the development of viticulture there were periods of boom (Roman rule in the Balkans) and periods of massive uprooting or destruction of vineyards (during the collapse of the Roman Empire and the Migration Period). During the First Bulgarian Empire vine growing flourished once again in a way that Khan Krum had to issue a law for grubbing of the vineyards. In the Middle Ages the bogomils also argued against the winemaking and usage. However, the viticulture continued to evolve. After the fall of Bulgaria under Ottoman rule it persisted. Koran forbids Muslims to drink wine, but the Turks allowed the Christian population to produce and drink wine.

In Strandzha the most favourable conditions for development of viticulture is in the southern part of the mountain (Lozengrad and Bunarhisar) and its parts of the Black Sea coast (Sozopol, Ahtopol). For the population of Lozengrad and the surrounding villages, viticulture and wine production are the main and only source of livelihood. The vineyards in the late 14th century covered an area of 150,000 hectares. In the 17th century the traveller Evliya Çelebi noted that the village Yuskyup (Scope) - near Lozengrad, produced a "wine famous in all countries", as well as the vineyards of Sozopol could not be counted.

In Bulgaria the vine growers keep many different grape varieties. In different periods they planted a mass one or the other.
A new vineyard is planted on a site pointing east and south in order for the grapevines to be in the sun from sunrise to sunset. The sandy soil is most suited, it is easier handled than black soils, yet yields are lower, but the sugar content of the grapes is much higher and the vines are resistant to phylloxera. Newly planted vineyard is called "young" or "fitya"(in Bulgarian). Vineyard which gives the grapes is called "samo loze” (English: “only vineyard") or "ambeli", thus the name of the villages Embelets (Lozenets) and Ambolopolis (Lozengrad). The care for the fruiting grape begins with its pruning on the holiday of St.Trifon, - 1st/14th of February also called Trifon Zarezan. The vineyard has to be hoed 5-7 times. Significantly proverb states: "The vineyard does not need a prayer but a mattock." Processing is done by several hoeing tools depending on the local tradition and the type of soil.

When the grapes ripen, people put in their vineyards straw scarecrows to chase away the birds that attack the grapes. Vintage (bg: grozdober) is in September. The day of the Congregation of Holy Cross (September 14, bg: Krustovden) is also called Grozdobernik because it marks the beginning of the grape harvest.
It lasts 20-30 days. Preparation starts a month earlier. Winegrowers clean their wine cellars and all vessels. Barrel that is to be used for the first time, is poured with boiling water, the bottom and top pieces are removed and washed with tap water then left to dry in the sun. To remove the smell of mould from old barrels they are filled with water in which quinces and figs have been cooked.
For the vintage are used different size and shape wooden vessels or baskets: willow basket with handle, oval vine basket of hazel sticks, futa vessel (futiya) made of oak staves that can be worn on the back, kados, korab (en:boat) made of driftwood, sharapana from poplar wood. Vintage carts have larger and more robust axles and wheels than the carts for other cargo.

Vintage requires several categories of workers: arabadzhia (carters) kesadzhii (pickers) and futadzhii (carrier). Pickers are usually young girls and women. At harvest day they leave at dawn. Each picker works in one row. The grapes collected in baskets are poured into the vessels futa or kados located between the lines. Kados fits 40-50 CCI grapes and can be filled by 3-4 pickers. The full containers are carried back to the cart and placed in the vessel sharapana. On the bottom of this sharapana in one end there is a hole for catch-drain of the must. The grapes inside the vessel are minced with a shovel or tamped with a thick wood. The cart on which is loaded the sharapana leaves with pickers and is carried to the household, which it belongs to.


<module="photo" id="1291" maxwidth="270" maxheight="300">
To squeeze the grape juice the man called sharapandzhiya treads barefoot, with pants rolled up. A wooden cask with large opening is placed under the hole of the sharapana. When the cask is full, the must is transferred in to barrels to ferment. Once fermentation is over, they clog the barrel and then coat with a slurry of ash and tallow or clay. When wine is ripe, it is poured into another barrel to separate the precipitate.

New wine must be decanted three times a year - twenty days after it has fermented, in early January, at the end of February or early March.
Bulgarians celebrated wine. Many traditional Bulgarian holidays, customs and legends are associated with it - especially 1 February (14 February Old Style) – the Day of St.Trifon, wineries and winegrowers. Folk songs sing of the grape and wine, symbols of fertility, grace, strength, fire, youth, the life itself ... 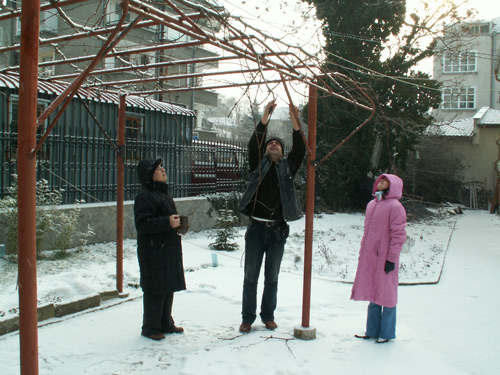 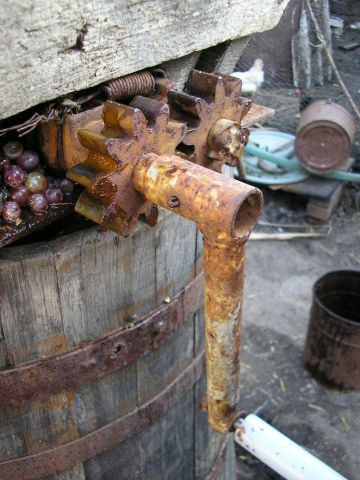 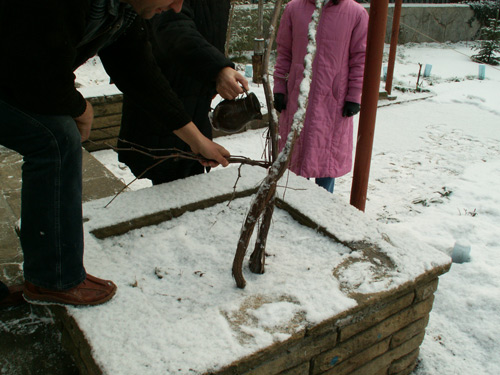 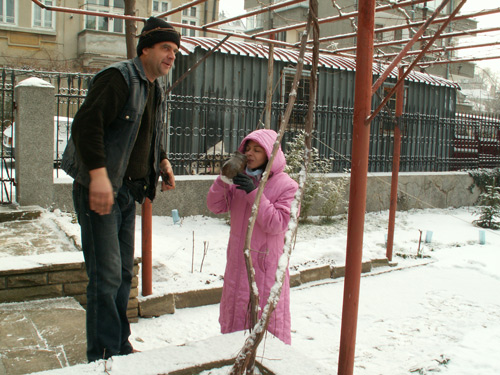 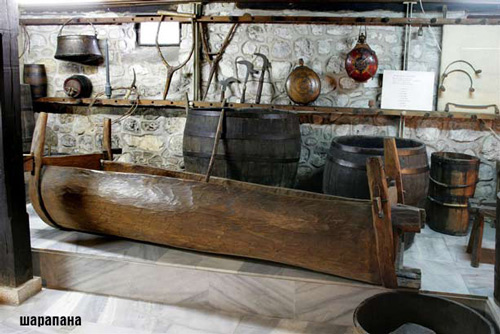 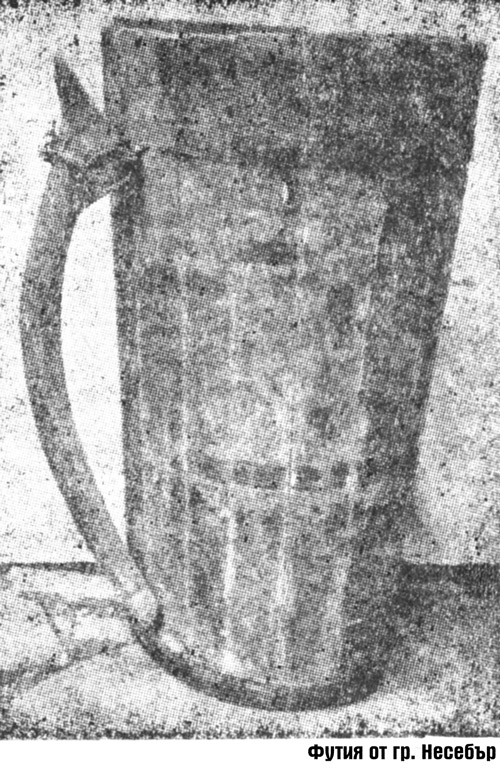 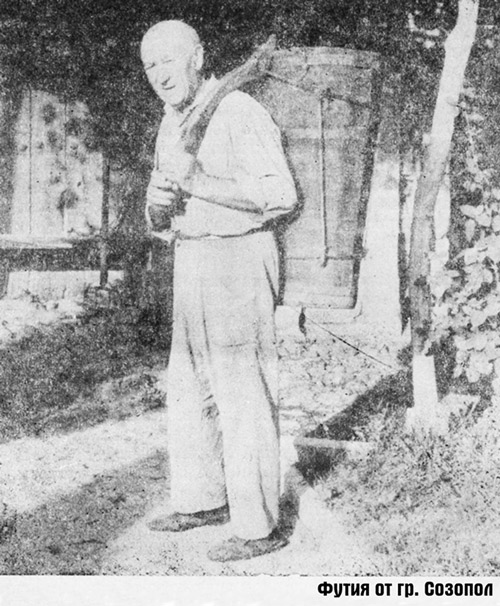 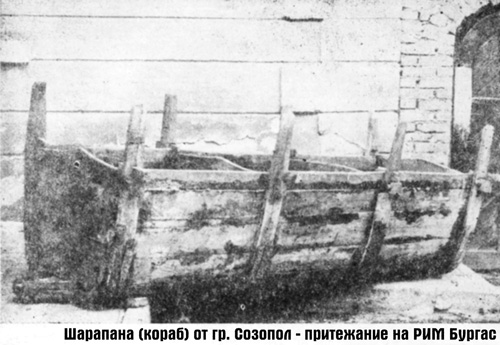 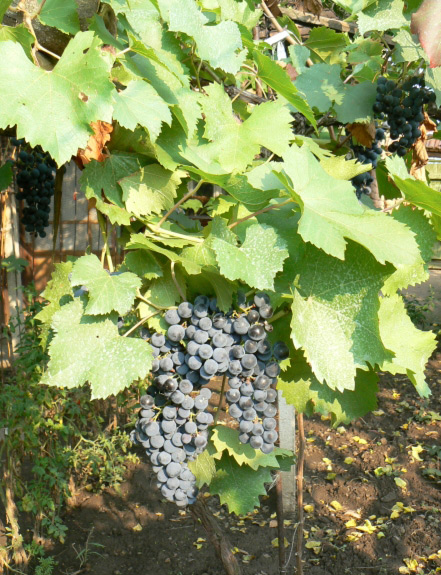 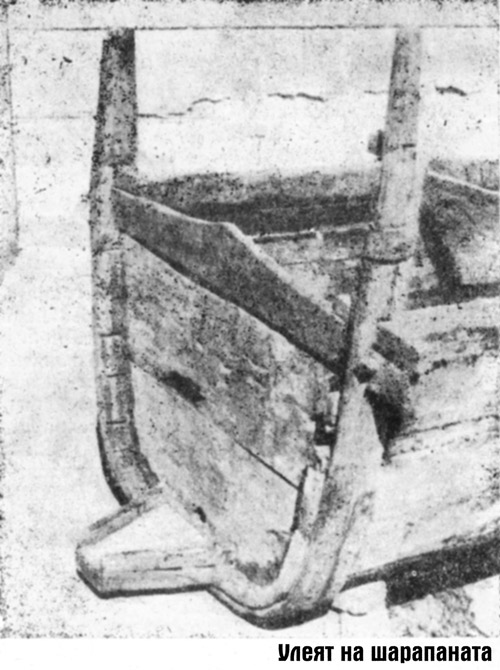 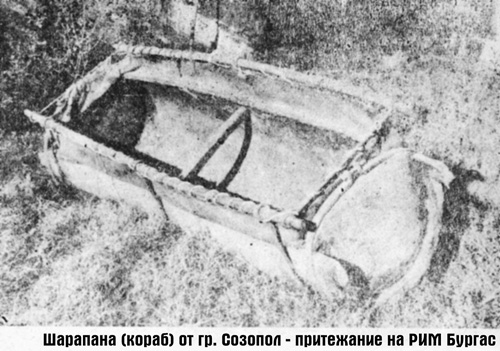 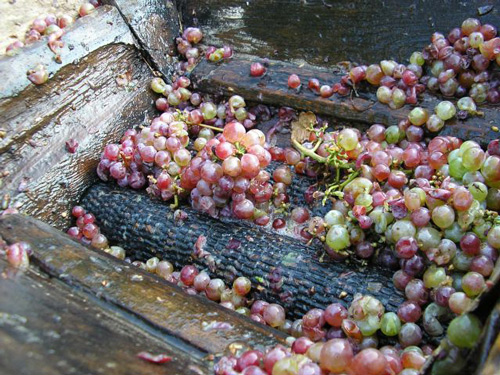