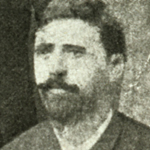 Graduated from Robert College in Istanbul, he participated in the church struggles and spent some time there after opening a commercial office. When he returned to Sofia, he had brought a suitcase full of books, which he gave away to the Bulgarians to read and to educate. His constant political activity continued until death. After the Liberation in1878, Panayot Rusaliev was elected as a deputy mayor several times, as well as for the post of municipal councillor and member of the church board. He is also an active participator in the Unification of the Principality of Bulgaria and Eastern Rumelia. He was awarded with the medal Cross of St. George by the Russian military command.