The noisy epidemic in the Balkans and its journey to Europe

The noisy epidemic in the Balkans and its journey to Europe

In addition to the civil wars, the Turkish attacks and insurgencies, especially along the Aegean coast, the constant problems with Genoa and the continuing financial difficulties, in the mid-fourteenth century Byzantium, the Balkans and the whole of Europe were swept away by a truly terrible attack - the "Black Death" as it was called the plague in the Middle Ages. In fact, it turns out that the statement that the Balkan states and specifically the medieval Bulgarian state were divided and weak, and this is the basis of their easy destruction by the Ottoman Turks, is correct, but does not answer the question - why they are in the such a situation. And one of the answers states that it was by 1347-1350 at least one-third of the peninsula's population, incl. and Bulgaria, was killed by the Black Death, and this is at the root of this political weakness and instability in the Balkan states after the mid-fourteenth century. 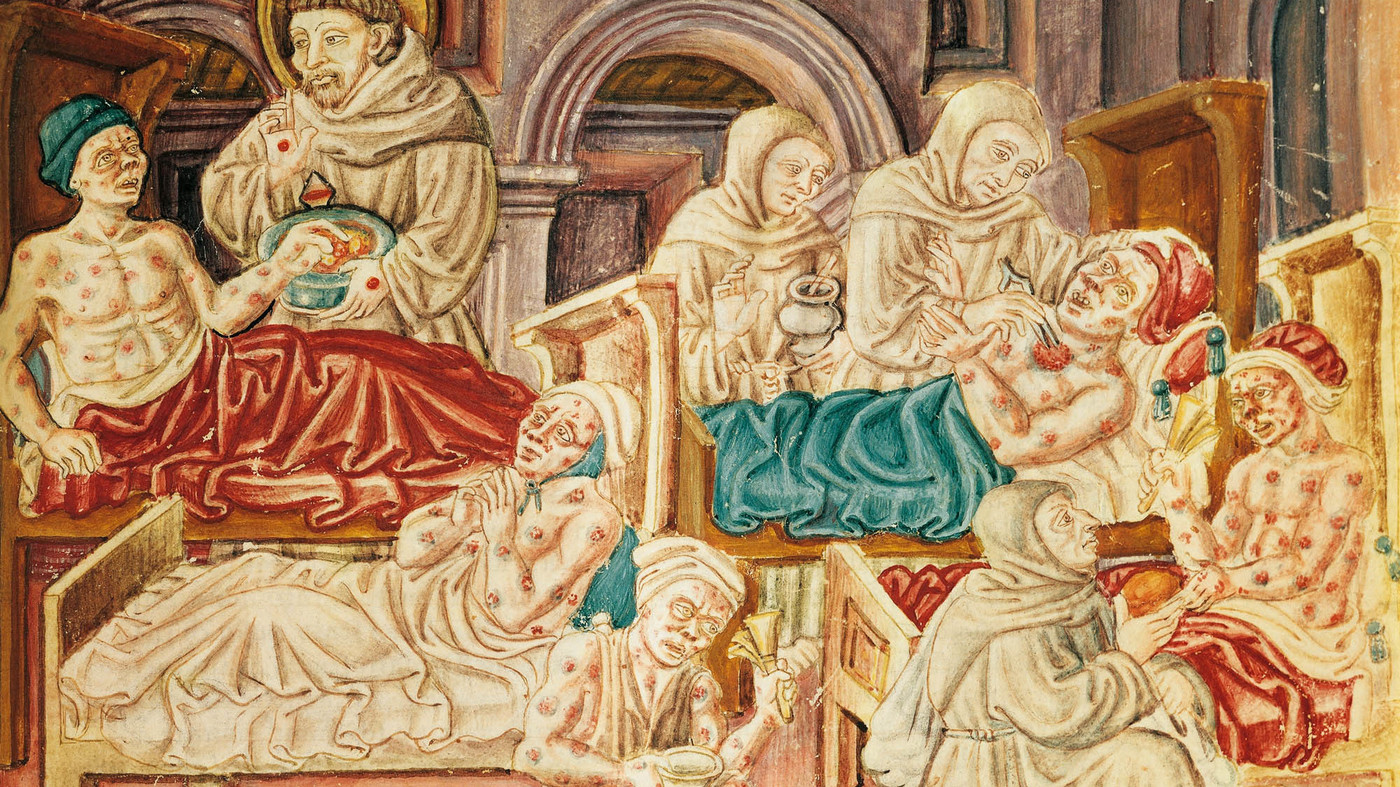 Franciscan monks care for the disease of bubonic plague in Italy. Painted by Jacob Odi

Today we know that the plague bacillus Yersinia pestis lives in the intestinal tract of two fleas, which in turn parasitize on a lot of rodents, but especially on the black rat. Human fleas can also carry bacilli. But there are two important conditions without which it is difficult or even impossible for a person to be infected. The first is to be bitten by a flea, because this is the only way the bacillus penetrates the human body and causes the disease. The second is that temperatures are higher than 15-20 degrees, otherwise it is very poorly active. The latter condition explains to a large extent why in Northern Europe the plague casualties are many times less than in the Mediterranean, incl. and in the Eastern Balkans.

The rodents, which are the carriers of the flea-infected fleas, have inhabited areas called "plague tanks" today. These are the Gobi Desert, southern Siberia, the Yinan Province in China, some desert parts of Libya and Iran, East Africa and the Arabian Peninsula. According to some researchers, in the 13th century, the climate changed, droughts occurred in the Gobi and Central Asia and populations of flea-infected rodents moved south and west where they crossed trade routes and spread bacilli.
According to other authors, this is not true. They believe that in fact the Mongols are the true cause of the pandemic, and in their movement west they crossed the infected areas and thus transmitted the infection to the steppes of Eastern Europe.
In any case, it must be borne in mind that in fact the cause of the disease is not that the infected person transmits the bacillus to the healthy person by air or by touch. The cause is fleas that, through the bite, cause the infection. So they and the rats that carry them are at the root of the spread of the plague. But humans are also hosts of fleas, and rats are constantly present in the goods carried, especially in ships.

The plague pandemic begins in Asia, from China. In 1332, the Chinese emperor Wen Tzong and his sons died from the plague, and in 1340 the disease was already in the capital of the Tatar Golden Horde - Saray, along the lower reaches of the Volga River.
In 1346-1347, the Tatar Khan Janibes besieged the Genoese city of Kafa on the Crimean peninsula (nowadays, Theodosia). A plague appeared in his army and the siege failed. Therefore, the khan ordered the catapults to be transported to the bodies of the Tatars dead from the plague. The fleas they carried carried the infection among Europeans as well. At first, they were not aware of this because the quarantine period was 6-7 weeks. Quite a few ships sailed from the port of Kafa during that time and set sail for Constantinople, the Apennines, the Western Black Sea.

Thus, the plague appeared in Christian Europe. It was in waves until the eighteenth century. Constantinople and the ports on the Western Black Sea were hit first, and almost all of them were then within the borders of the medieval Bulgarian state. Today, some authors consider the plague epidemic of 1347 to be comparable to the epidemic of Emperor Justinian I of 542, when up to 10,000 people died a day. According to Nicephorus Grigor, "a severe and plague-like disease" in 1347 "devastated both cities and villages ... in which only one or two days in most homes, all residents died at once." According to Emperor John Cantacuzin, who lost his son Andronicus to the disease, the plague devastates "almost all the coastal lands of the world" and then passes "almost throughout the surrounding world" that same year, but in the fall, merchant ships transmit the Apennines and first place in Messina. Gradually, all of Southern Europe is covered by a pandemic. In 1348, a ship carrying Bordeaux wine delivered in England, in addition to the drink, the infection. From here, Ireland and Scotland are blazing. Next year is the turn of northern Europe. 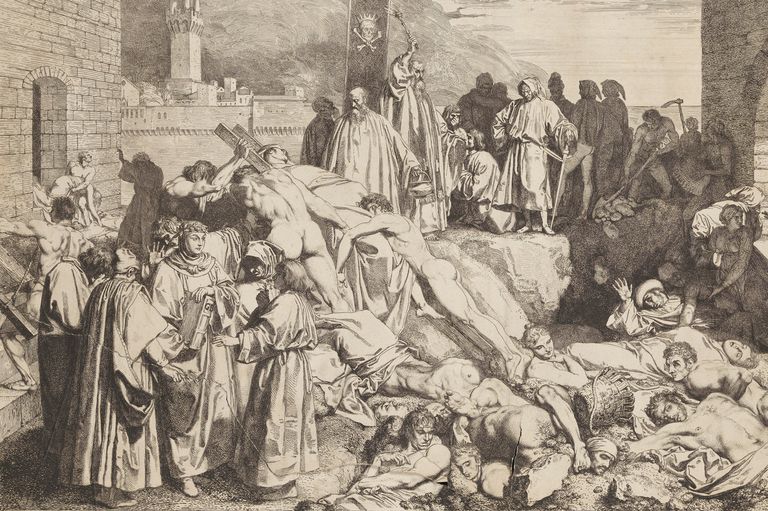 The Plague in Florence in 1348. Drawing by Luigi Sabateli

As a result of the plague pandemic, Europe's population is reduced by between 40 and 50 percent. The figure is much greater for the southern parts of the continent than for the northern ones. The demographic status of individual countries has been brought back literally centuries ago. It is quite reasonable to say that the Bulgarian lands are no exception. Today, it is estimated that, with an estimated population of about 2.5 million on the eve of the epidemic, no more than 1,500,000 Bulgarians are left behind. It is precisely this demographic plague caused by the plague that is forgotten today, or at least not so widely known to the masses, but in fact it is one of the factors that facilitate the easy conquest of the Balkan states by the Ottoman Turks.

In this sense, it is appropriate to take into account not only the political situation in the Balkans. If the Turkish attacks and civil wars, especially in Byzantium, made ordinary Romeans feel increasingly the weakness of their country, then the plague has crushed the spirit of the population of the entire Balkan Peninsula. Conditions are created for permanent and extremely deep apocalyptic moods and fatalism among ordinary people. It is crushed by the massive pestilence, which leads to depopulation of entire regions, mass internal migration, mass starvation caused by depopulation, and the consequence is also appalling - a drastic increase in food prices. All this, combined with the Turkish attacks and the ongoing military clashes between internal groups, specifically in Byzantium, make people feel abandoned not only by their political leaders, but above all as punished by God. That is why the Patriarch of Constantinople, St Filotay Cokin, writes special prayers and canons against the plague. 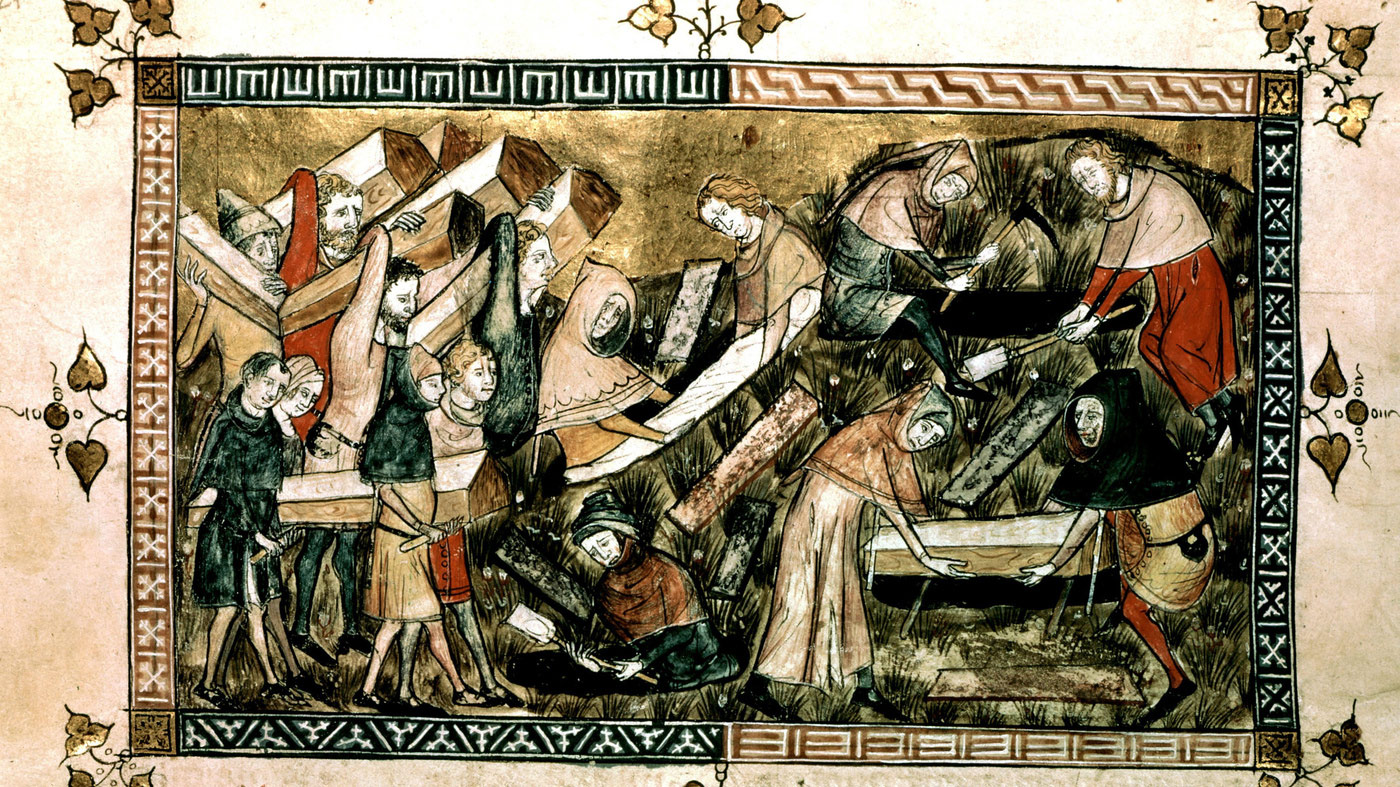 Funeral of plague victims in Tournai, Belgium. Drawing from 1349

Similar sentiments are in full force for the population across Europe. Witches and sorcerers are constantly anathematized in the temples, with plagues being blamed in different countries besides the Turks, Tatars and even the grave-makers. Petrarch, whose beloved was dying of the infection, blames the epidemic on the epidemic of the sinful papal curia, which through its outrage has led to God's punishment. For their part, Roman high priests accused Petrarch of witchcraft because he quoted the pagan poet Vergil.
Today we have every right to claim that there are similar apocalyptic moods in Bulgaria in the mid-fourteenth century. Eloquent evidence of this is the convening of two church councils in Veliko Turnovo. Their date is unspecified, with some researchers suggesting that there was actually only one church congregation. According to recent research on the late Archives. P. Stefanov, these councils were convened in 1347-1348 and in 1360. In the life of St. Theodosius Turnovski it is noted that the first council was directed against people who came to Tarnovo from Thessaloniki and Constantinople. They are accused of blasphemy, referring specifically to Lazarus, pop Stefan and Cyril Bosota. But, as the archive notes. Stefanov, Bogomilism in this historical period is extremely poorly documented. He believes that those accused of this heresy are in fact refugees from the plague who, in their desire to escape the epidemic, are settling in Bulgaria. There is enough evidence in life about the dreaded famine that has pervaded these refugees - one of the accusations against them is that they were eating "bad food", i.e., food purchased from Gypsies or Jews, or one that usually not consumed - frogs, snakes, etc. This shows in full light the impasse of those people who, driven by the plague, find themselves in a completely alien place without subsistence and are forced to feed themselves in every way possible.

The second fair in Tarnovo was called in 1360, when there was a second plague wave in the Balkans. It is directed directly at the Jews. However, these sentiments should also be interpreted as a belated expression of anti-Semitic sentiment in Europe precisely from 1347-1348, when Jews were accused of causing the plague by infecting the wells of Christians. As a result, mass riots and killings of Jews are organized in Toulon, Barcelona, ​​and in almost all western cities. The tension escalated to such an extent that it required Pope Clement VI to issue not one, but two whole anti-Jewish pogroms within 1348 alone.