At the end of 2008 for the first time, an archaeological expedition from Regional Burgas Museum carried out archaeological research in parts of Foros peninsula near Burgas. The discovered during the archaeological coring was sensational, preserved remains of the lost city, predecessor and historical symbol of Burgas city - the ancient and medieval fortress and port Burgos (Poros).
Foros pennisula was known by more common localizations in the European charts from the 13th-17th century as an old fortress and port under the name Poro (strait) or Poros, which assumes the fortress defended the swelling of Mandra Lake (Skef). A stone inscription from the 2nd century AD (shown in the Archaeological Exposition of Regional Burgas Museum) states that during the Roman Empire at the border of the Roman colony Deultum were built “burgi” (fortifications).

Historians are unanimous that at the swelling of Mandra lake, there was a large port connecting the Deultum colony, which was guarded by an inaccesseble wall. The road station Pudizo marked in Tabula Peutingeriana from the 4th century, has been loclized in this same area.

The area also is famous for a certain memorable battle from the time of the Second Bulgarian State. At the beginning of the 14th century the Bulgarian Tsar Theodore Svetoslav made his march to the Black Sea coast, where his power spread over Rusocastro, Mesembria, Anchialos, Sozopolis and Agathopolis. Thus, in 1304 at the bridge over the swelling of Mandra lake also called Skafida (Poros), a crucial battle was held which ended with a significant victory of the legendary Bulgarian ruler over the Byzantine army.

Many years the territory of Cape Foros is unavailable for the public because of a military base. First after area specialist archaeologists discovered the existence of two separate ramparts of the late antiquity, related to the fortification of the most important areas in the Foros peninsula and by standing buildings.
Found was a significant amount of construction and domestic ceramics from the 4th-6th century AD and a stone block of great interest with a part of inscription in Greek from the Roman era. The inscription mentions that an event occurred at this place during the reign of the great Roman Emperor Gordian the Third (238-244 AD).

In 1989, a part of the fortress wall was discovered by the construction works of a cowshed. During the present research, the continuation of the wall to the west was estimated of ca.190 m in length. Uncovered was the external surface of the wall at 15 m length and width 3.5m, as well as the existence of a rectangle tower – bastion with internal width 4.2m and standing parts of gate-side-walls. In the north-east, the fortress wall took a heavy damage in later time and it is preserved only at the substruction.
After looking around the area, the experts determined the presence of two Late Antiquity defences from the 4th-6th century connected to the fortification of the most important areas on Foros Peninsula, as well as many separate buildings. Discovered were a significant amount of construction and domestic ceramics from the 4th-6th century and a part of stone block with inscription in Greek from the Roman era, used as spolia inside the fortress wall construction.

Studies were conducted at the following sites:
1. Southeast fortress wall
In 1989, a part of the fortress wall was discovered during building works of a cowshed. During the present research, the continuation of the wall to the west was estimated of ca.190 m in length. Uncovered was the external surface of the wall at 15 m length and internal face in two sections with length 2 and 2.5 m. Width of the wall is ca. 2.90 m. as well as the existence of a rectangle tower – bastion, which is preserved only in parts of gate side-walls connecting it with the fortress wall. They are 0.9 and 0.5 m in length and 2m in width. The internal width of the tower is 4.20 m. In this area the wall is 3.4 m thick, because it contains the inner wall of the tower. Preserved is up to 0.5 m of the substruction and a layer of the superstruction. The solid structure is laid with crumbled stones filled with white mortar. In Northeast, the fortress wall was destroyed in a later time preserved only in the mortar overlay of the foundation.

2. Northwest fortress wall
At the beats of the northwest coast of Cape Foros, the archaeologists found the presence of a construction in the coastal profile. During the research, they uncovered two towers of the fortress defence system. The tower in Southwest is semicircular or U-shaped. The tower’s frontage has tumbled down in the sea and there are only parts of substructure preserved. Thickness of the wall of the tower is 0.73 m with internal width 3.10 m. The structure is laid with crumbled stones, hewn on the external surface, filled with white mortar to the floor level and red mortar over it. The remaining part of the interior has uncovered floor level of brick pavement with two bases of ca. 0.25 m. In the middle of the tower we found a tunnel with inside width 0.6 m, which is ends as a false arch. The bricks from the floor level differ; their prevailing dimension is 0.29x0.29x0.06 m. The second tower is rectangular, situated 15 meters northeast of the first. Here the internal width is 3.8 m, issued in 2 m of the fortress wall facade. Completely preserved is the south-western orthostates. The side-walls thickness varies: the southwest is 0.85 meters and the north - 1.05 m. Structure is similar to the first tower. We found in the first tower profile a small portion of brick walls, which goes deeper into the coastline. Between the two towers existed facilities, where were uncovered elements of walls and floor level. On the surface of the ground between the fortifications’s walls can be seen more mural remains.

3. The Church
Near the highest point of Cape Foros, on the surface, the archaeologists determined the remnants of walls, and a large amount of construction ceramics. The local inhabitants called this place "the Church". The remains of a building with preserved foundations wee discovered after probing in the area. The building plan and date of the findings give a reason to repost this place as the location of the famous monastery St. George, mentioned in Byzantine sources from the 13th century.
The story tells that the monastery was built on the place which sheltered the great apostle Andrew Protocletos during his journey to preach the Gospel. In the course of its existence, it was an important spot for the crypto-Christian pilgrims. The monastery was included in the group of Sozopol monasteries that are autocephalous, which means they did not subject to the local bishops but directly to the Constantinople Patriarchate.

4. Cape Kabata
The northeast shore of Cape Foros in the landslide area, the smaller Cape Kabata projects deep into the sea. A large amount of ceramics from the 4th-6th century appears throughout the surface area.
Configuration of the terrain and structures in the profiles give the specialists a reason to assume that they have caught onto a badly destroyed part of the fortress wall, obstructing the foot of Cape Kabata.
Archaeological studies lead to assumption that the whole Foros peninsula was fortified by defence facilities built in late-Roman era and restored repeatedly in later ages to the middle of the 15th century.

Archaeological studies lead to assumption that the whole Foros peninsula was fortified by defence facilities built in late-Roman era and restored repeatedly in later ages to the middle of the 15th century. These data clearly outline a significant historical site directly associated with the history of modern Burgas. 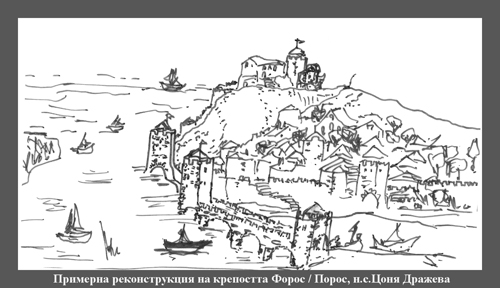 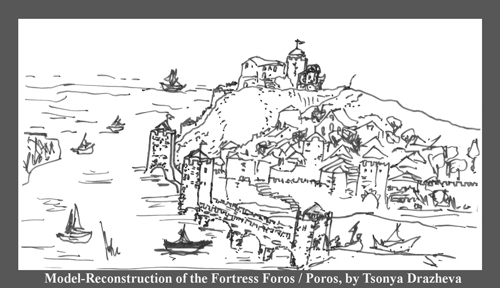 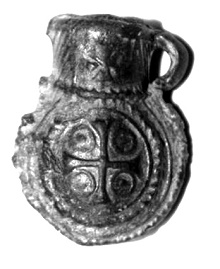 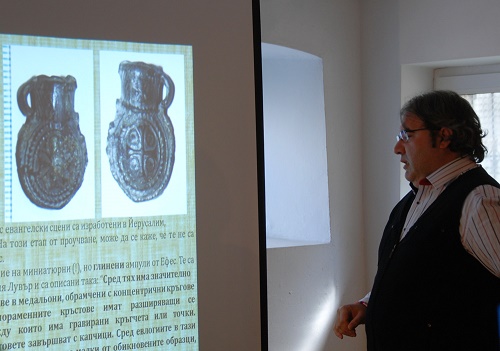 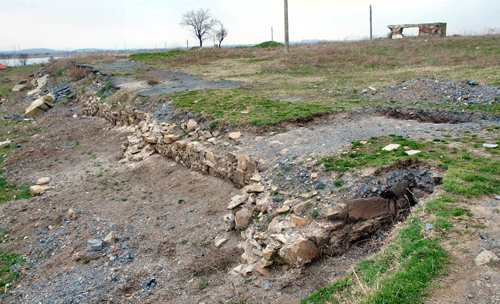 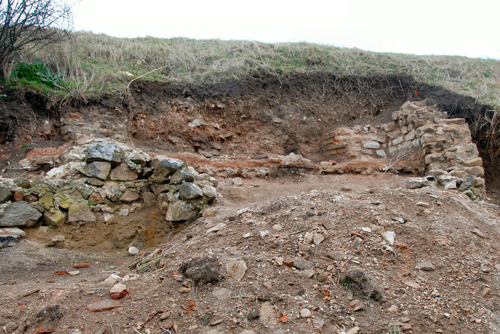 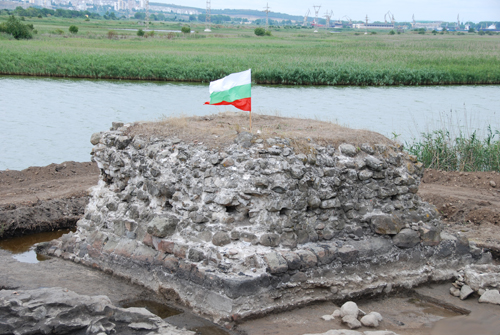 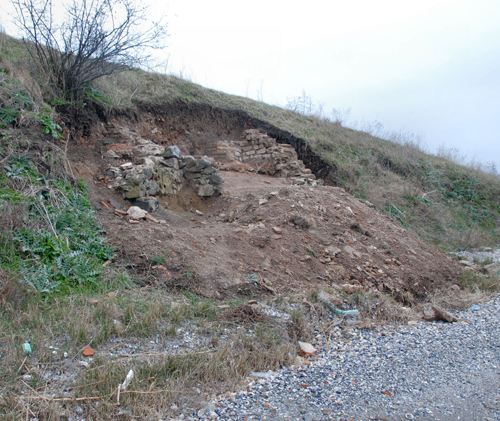 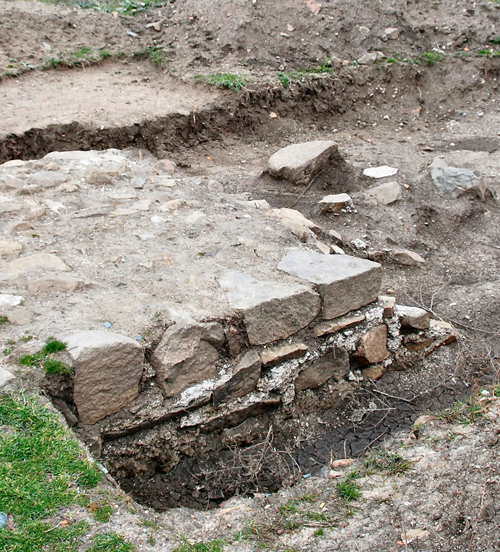 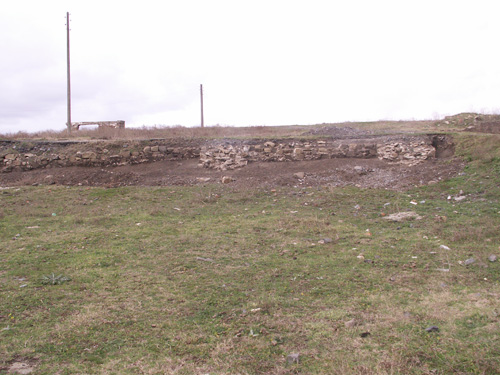 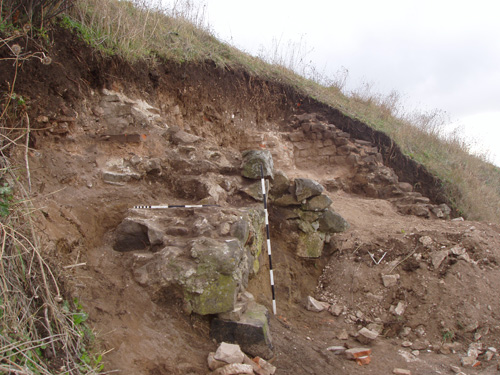 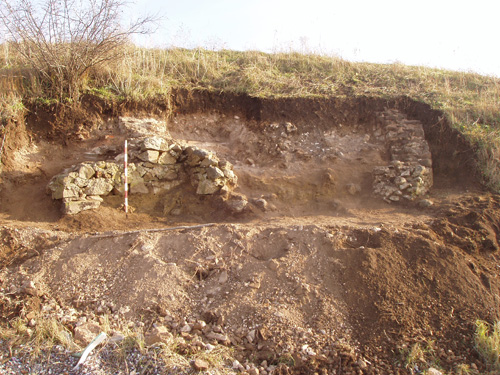 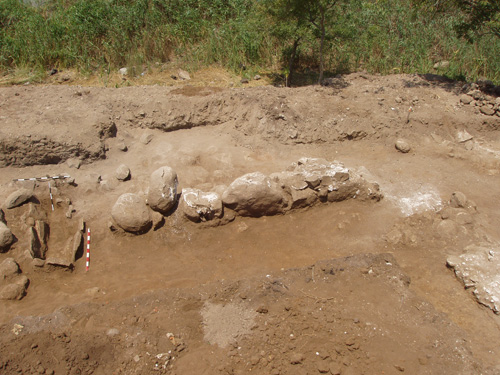 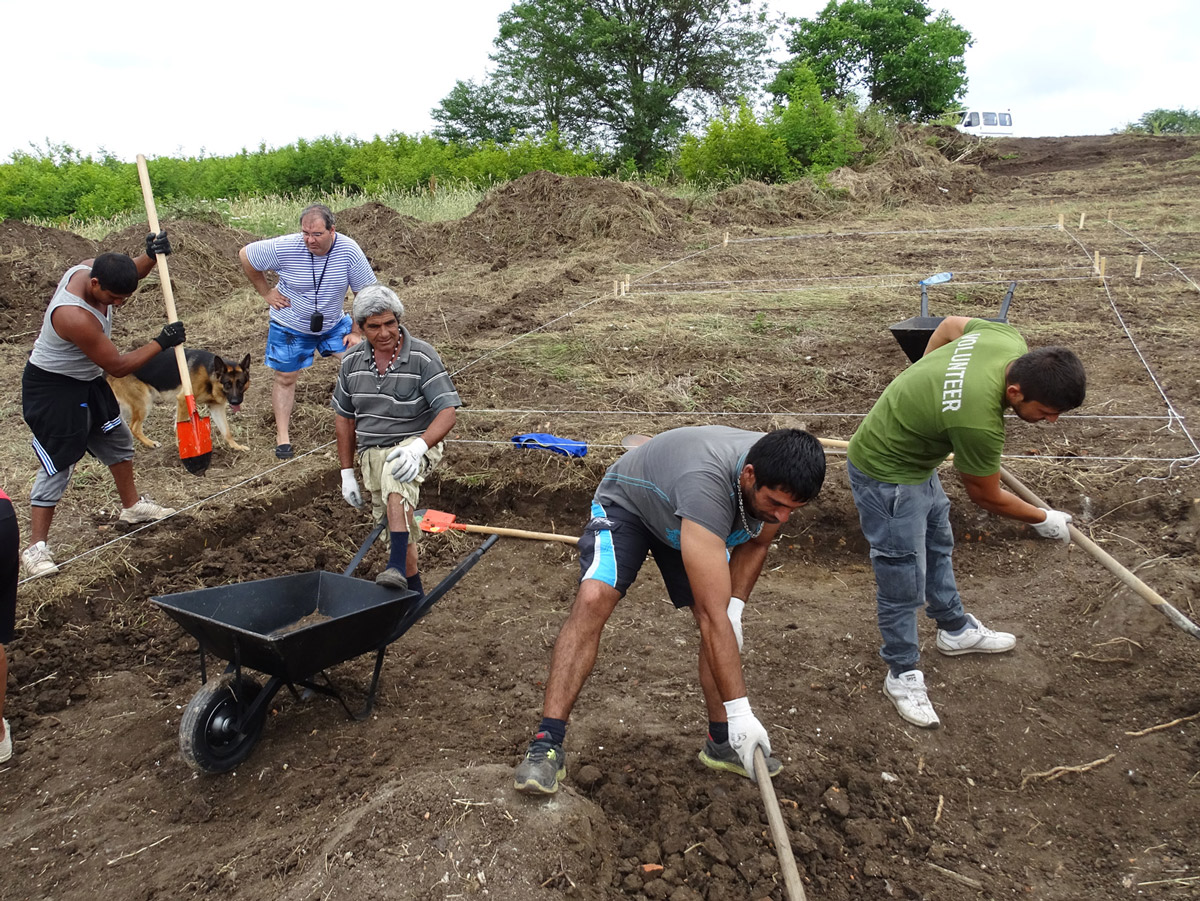 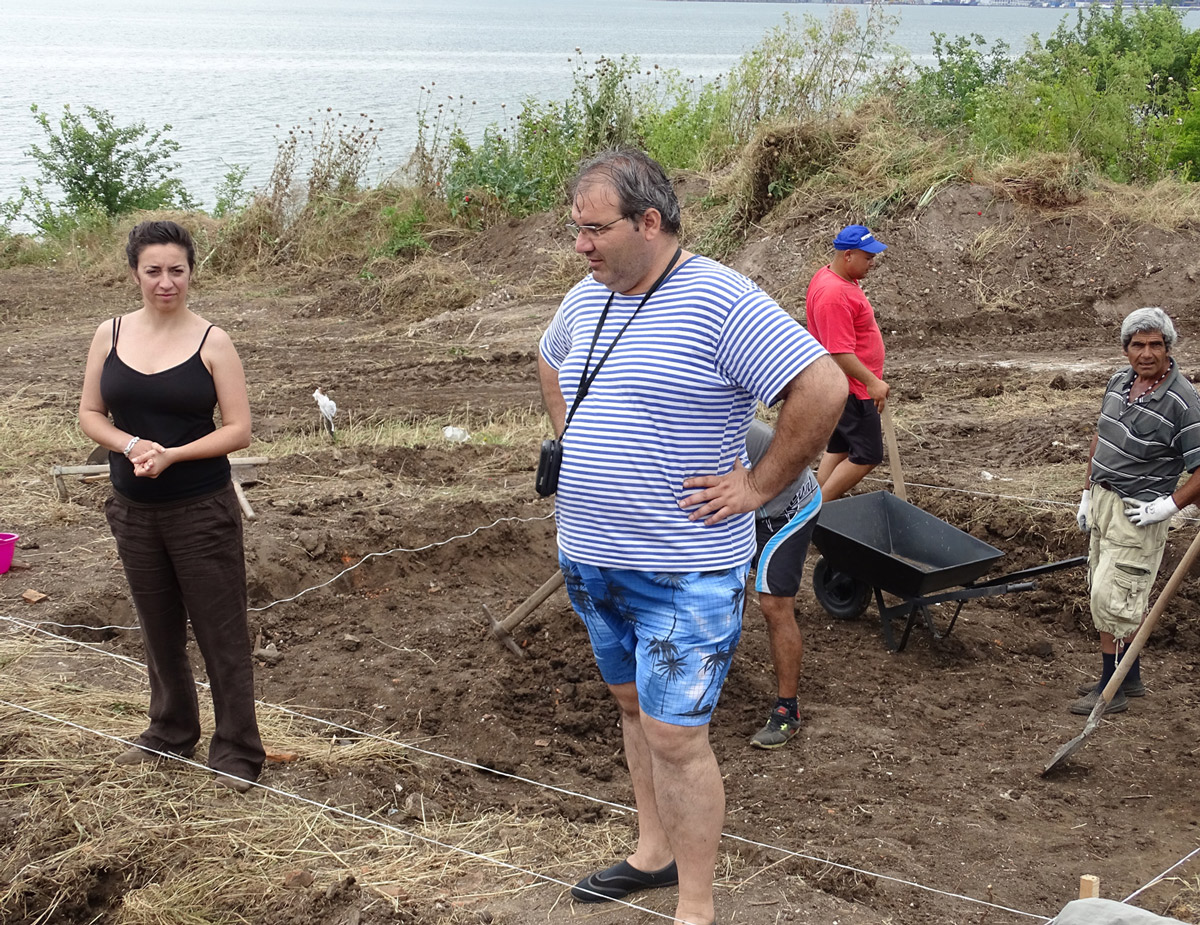 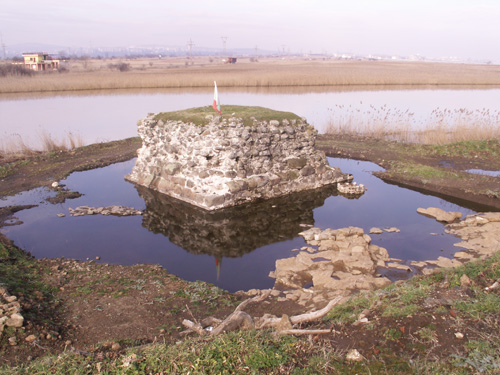 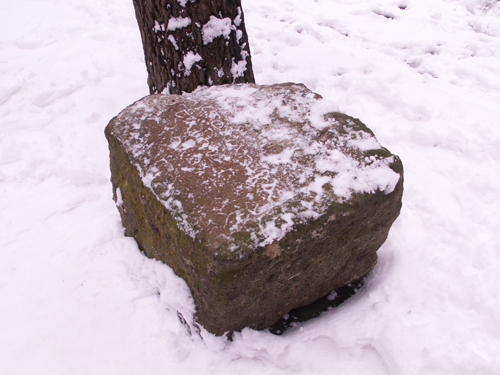 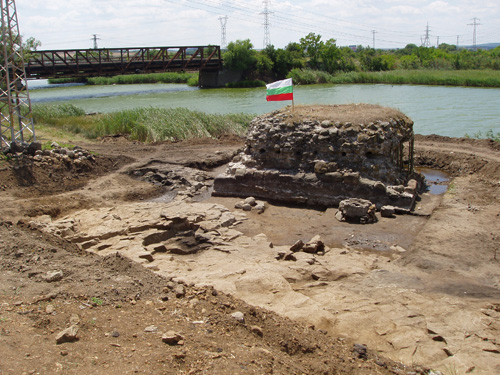 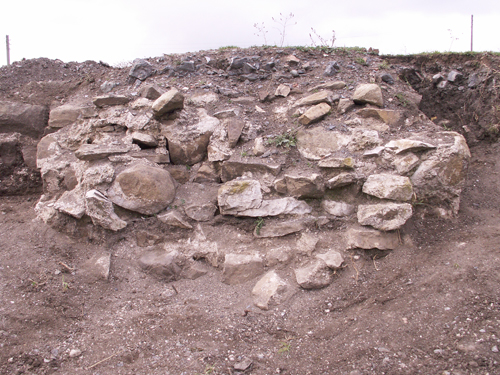 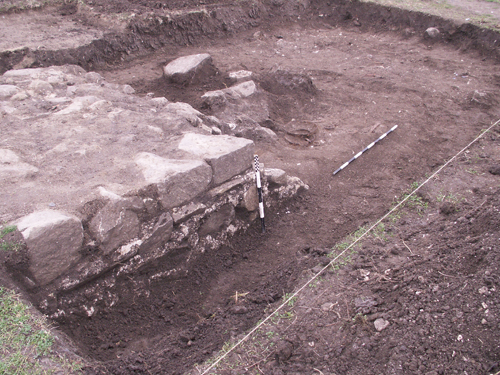 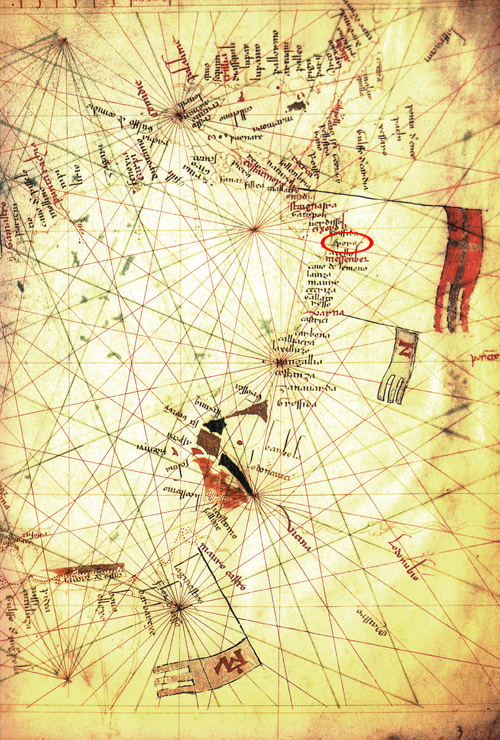