<module="photo" id="1981" maxwidth="250" maxheight="300">
This type of wind music instruments, aerophones, is known in the East since ancient times. According to old Greek sources, the Thracians played bagpipes.

The bagpipe is a favorite music instrument in almost all parts of Bulgaria. Because of its loud tone, it was play more outdoors at weddings, village fairs, games, and other folk festivals. The bagpipe is a typical instrument throughout Thrace, Eastern Dobrodzha and the large Rhodope area.

In Bulgaria there are two common types of bagpipes - small called "jura" and a large "kaba". The small bagpipes are used everywhere in the plains and mountains, as the large - especially in the Rhodope region, where it serves as a general accompaniment to folk songs.

<module="photo" id="1979" maxwidth="250" maxheight="300">
The bagpipe consists of a leather bag and wooden parts - bellows, drone and chanter held in place in stocks. The wooden parts are made mostly of dogwood, plum and other hardwoods. The bag of the smaller type is made of kid-leather, and the large - from leather of a large kid or a small goat.

At the "neck skin" is connected the chanter, which has eight holes for the fingers - seven along the front side and one on the back side for the thumb. They have different diameters. The biggest are the first and fourth hole counted from the bottom up, and the smallest is at the top - seventh hole. Inside it is put a thin tube from goose or hen feather. This hole folk musicians call "marmarets" or "hellhole", because it determines the clear tone of the instrument. On some of the big holes musicians put wax for adjusting the tone height.

At the top of the chanter is placed a another piece called "piskun". It's made from 6-7 cm long elderberries or cane stems.

The leather-bag is tied with a cord on the inside. It is inflated from a bellow. On the lower end of the bellow there is a leather flap to hold the air. Therefore piper from time to time may stop blow in air without stopping to play.

The bagpipe can be used with equal ease to produce slow and fast horo tunes.
The bagpipe is used as a solo instrument, and for ensemble playing with other folk instruments: flute, fiddle, drum.
Often at folk festivals can be heard several bagpipers to play together.

In 1961, at a festival in Rozhen, an orchestra of a hundred bagpipes performed in unison. 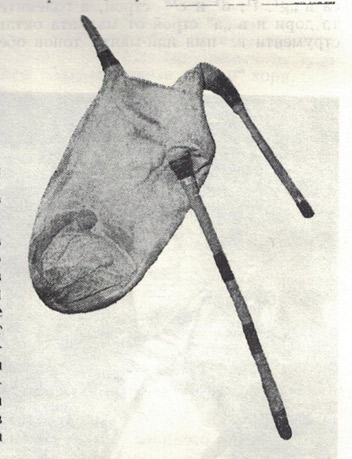 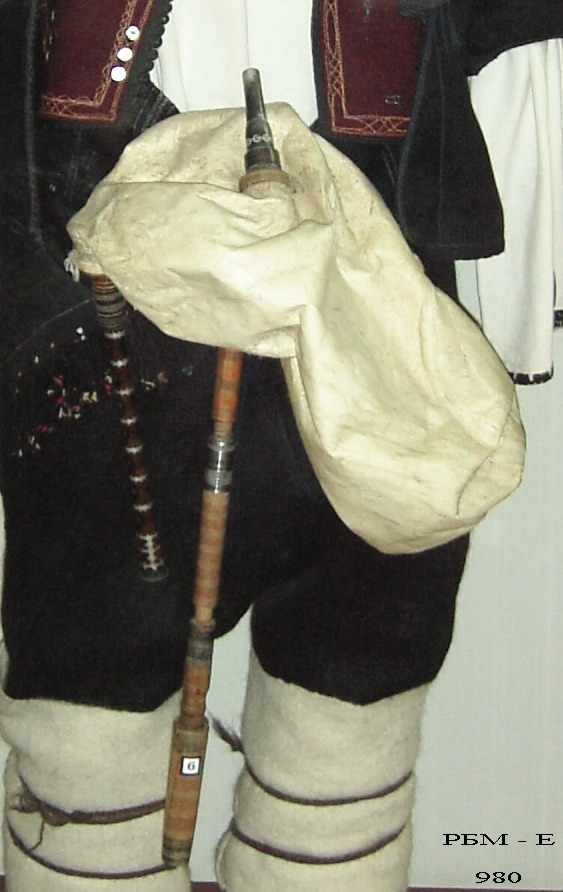